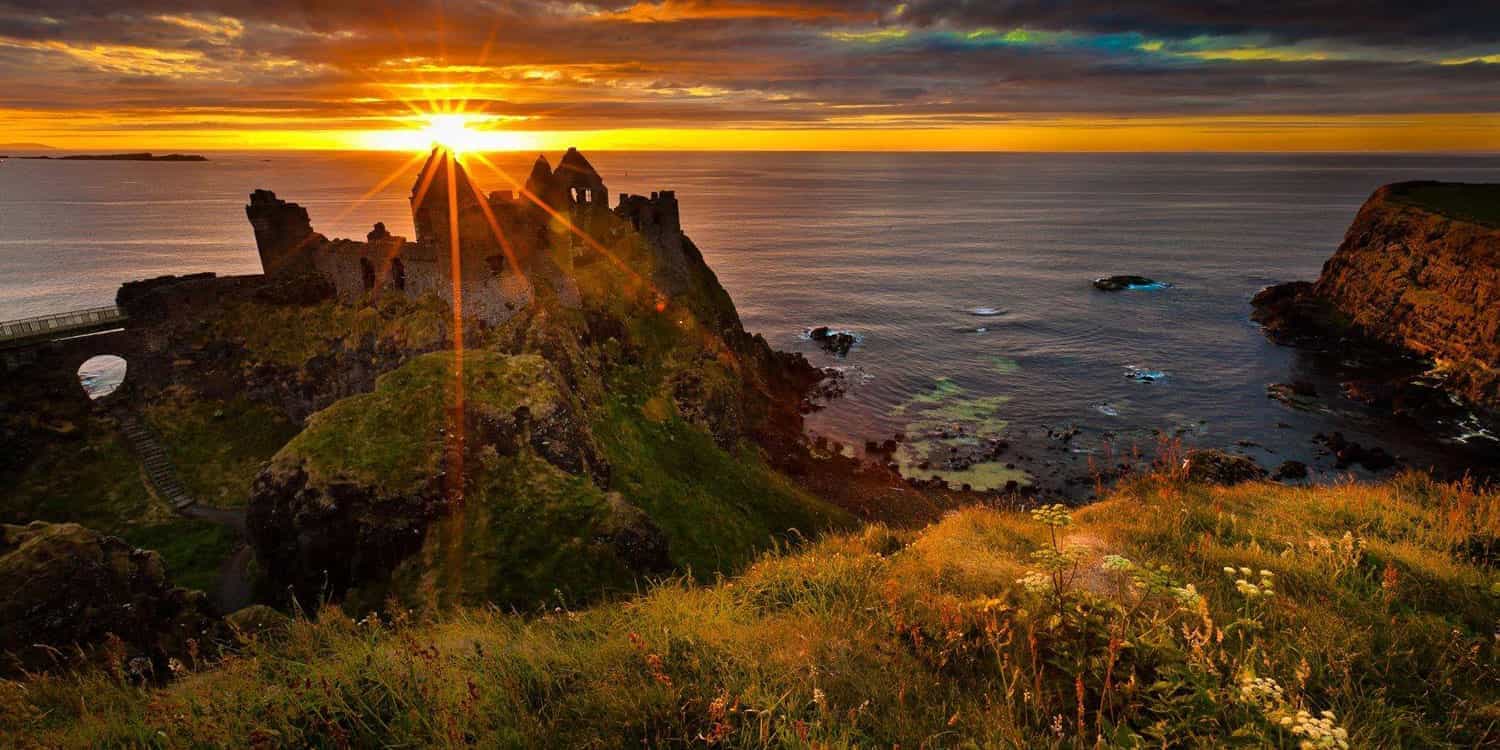 Northern Ireland has an extreme north to south extension of about 135 km (about 85 mi) and an extreme east to west extension of about 175 km (about 110 mi). The shoreline is characterized by numerous irregularities and is about 530 km (about 330 mi) long. The major indentations are Lough Foyle in the north and Belfast, Strangford, and Carlingford loughs in the east. A striking feature of the northern coast is the Giant's Causeway, a rock formation consisting of thousands of closely placed, polygonal pillars of black basalt.

The country consists mainly of a low, flat plain in the approximate center of which is Lough Neagh (about 390 sq km/about 150 sq mi), the largest lake in the British Isles. Other important lakes are Lough Erne and Upper Lough Erne. Apart from several isolated elevations, three major areas of considerable height are the Sperrin Mountains in the northwest, the Antrim Plateau along the northeastern coast, and the Mourne Mountains in the southeast. The highest point in the country is Slieve Donard (852 m/2796 ft), a peak in the Mourne Mountains.

The chief rivers are the Foyle River, which forms part of the northwestern boundary and flows into Lough Foyle at Londonderry, and the Upper and Lower Bann rivers. The former rises in the Mourne Mountains and empties into Lough Neagh; the latter flows out of Lough Neagh to the North Channel. Among the many other rivers are the Main, Blackwater, Lagan, Erne, and Bush. Because of the generally flat terrain, drainage is poor, and the areas of marshland are extensive.

The climate of Northern Ireland is mild and damp throughout the year. The prevailing westerly winds from the Gulf Stream are largely responsible for the lack of extreme summer heat and winter cold. The average annual temperature is approximately 10 °C (50 °F); temperatures average about 14.4 °C (about 58 °F) in July and about 4.4 °C (about 40 °F) in January. Rainfall is distributed evenly during the year. The annual precipitation frequently exceeds 1016 mm (40 in) in the north and is about 760 mm (about 30 in) in the south. The level of humidity is high.

The most valuable natural resources of Northern Ireland are its fertile soil and rich pasturelands. Natural waterpower is abundant. The chief minerals are basalt, limestone, sand and gravel, granite, chalk, clay, and shale; bauxite, iron ore, and coal also are found in small amounts. Peat is important as a fuel.

In general, the plants and animals of Northern Ireland are similar to those of the island as a whole. The only distinctive plant is a species of wild orchid, Spiranthes stricta, found in the valleys of the Upper and Lower Bann rivers. Distinctive species of animal life include the pollan, a freshwater variety of whitefish found in Lough Neagh and Lough Erne.

The majority of the people are of Scottish or English ancestry and are known commonly as the Scotch-Irish. The remainder of the population is Irish, principally native to Ulster.

English is the sole official language. Unlike the Republic of Ireland, Northern Ireland does not encourage the use of the Gaelic language.

The population of Northern Ireland (1992 preliminary) was 1,610,300. The overall density was about 113 persons per sq km (about 295 per sq mi). The population is unevenly distributed, with greater concentrations in the eastern half. It is almost equally divided between urban and rural dwellers.

Northern Ireland is divided into 26 districts. Each district is governed by an elected council.

Religious affiliation has been a key determinant in Northern Ireland's history, politics, and social life since the 17th century. At various times it has determined access to voting and jobs, standards of living, and education. In modern times it has come to symbolize the differences between the descendants of the original Irish inhabitants and those of the settler community. The descendants of the Scottish and English settlers are predominantly Protestant; those of the original Irish inhabitants are overwhelmingly Roman Catholic. In the early 1990s, almost 51 percent of the population regarded themselves as Protestant, and almost 39 percent as Roman Catholic. The Roman Catholics are the largest single denomination. The largest Protestant denominations are the Presbyterian, the Church of Ireland, and the Methodist. Unlike England, Northern Ireland has no established, or state, church. The Church of Ireland, at one time a branch of the Church of England, was disassociated from the state in 1871.

Education in Northern Ireland is free and compulsory for children between the ages of 5 and 15. The educational system is essentially similar to that of England. In the early 1990s Northern Ireland had nearly 1100 primary schools, annually attended by approximately 191,000 pupils and staffed by more than 8200 teachers. Secondary and special schools numbered about 275 and were attended by about 147,000 students taught by 10,300 instructors. The country has two universities: Queen's University of Belfast, founded as Queen's College in 1845, and the University of Ulster (1984), with campuses in Coleraine, Belfast, Jordanstown, and Londonderry. The total annual university enrollment in the early 1990s was about 17,000. Two colleges, the Belfast College of Technology (1901) and the Union Theological College (1978), are in Belfast.

Originally, Northern Ireland was culturally indistinguishable from the remainder of Ireland. However, with the waves of colonization from England and Scotland during the 17th century, the northeastern province of Ulster evolved a distinctive cultural identity. The settlers, who came to form a majority in the region, were British in culture and tradition, and Protestant in religion; their descendants are committed to keeping the province constitutionally allied with Great Britain. The Irish inhabitants, in a minority and for centuries politically and economically marginalized, had as their goal the reunification of the island of Ireland. In addition, Northern Ireland is considerably more urbanized and industrialized than the Republic of Ireland.

Northern Ireland shares the early cultural glories of all Ireland. To Ulster belongs one of the two great cycles of Irish myths that contain the exploits of CЯ Chulainn and the tragic story of Deirdre (see Gaelic Literature). There is a thriving theatrical movement in Belfast, and much literary activity. Belfast is the base of Opera Northern Ireland, which presents seasons at the Grand Opera House in the city, and also tours the province. A ballet company is based in the capital, as is the Belfast Philharmonic Society, one of Britain's leading choral societies. The Ulster Symphony Orchestra is among the leading orchestras of Britain. Queen's University hosts the annual Belfast Festival.

Northern Ireland has two national museums: the Ulster Museum in Belfast, which houses a collection of Irish antiquities; and the Ulster Folk and Transport Museum in Holywood, County Down.

Northern Ireland's gross domestic product in 1992 was about $18.3 billion. In general, the economy of Northern Ireland is based on agriculture and manufacturing and is closely tied to that of Great Britain as a whole; almost half of manufacturing output is sold to the rest of Britain; one quarter is sold locally. Northern Ireland has been particularly hard hit by the decline of traditional industries like shipbuilding, on which much of its prosperity and many jobs depended. The lack of economic opportunities, particularly for young people, played a role in the sectarian conflicts of the 1970s. At the same time, however, the threat of terrorism hindered efforts to attract investment and create new jobs in the 1980s. Considerable public expenditure has been devoted to urban renewal in Belfast and Londonderry. Various agencies have been established to attract new companies and encourage small business, backed by tax and other incentives. Helped by moves towards a peaceful settlement of the sectarian violence, several important new investments were announced in the early 1990s.

Northern Ireland is sparsely forested, but the state afforestation program has made considerable progress, and in the early 1980s about 60,000 cu m (about 2.1 million cu ft) of timber were felled annually. The annual catch of fish and shellfish in the early 1990s was about 15,000 metric tons. Saltwater fishing is centered on the eastern coast, principally off Newcastle; the most important species caught include herring, whiting, and scallops. Freshwater fisheries operate in Lough Neagh, Lough Erne, and Upper Lough Erne; the species caught include salmon, trout, eel, and pollan.

Mining and quarrying are relatively unimportant economic activities in Northern Ireland. They employed only about 6200 workers in the late 1980s. The chief minerals are basalt, sand and gravel, peat, chalk, limestone, and granite.

Manufacturing is a major source of the national product. In the early 1990s the industrial output of Northern Ireland was about 18 percent of the gross domestic product (GDP). Manufacturing and construction accounted for about one-fifth of the employed work force.

Traditionally, the leading industries of Northern Ireland have been the manufacture of textiles and clothing. Linen is the most important textile manufactured; cotton cloth and fabrics woven of synthetic fibers rank next in importance. Shipbuilding and the manufacture of aircraft also are major industries; large shipyards are located in Belfast. Other manufactures include textile machinery, electrical and electronic equipment, processed food, liquor, tobacco products, and chemicals.

About 80 percent of Northern Ireland's external trade is with Great Britain, and the British pound is the legal tender of Northern Ireland. A large portion of the exports to Great Britain is transshipped to other countries, however. Northern Ireland exports linen goods, textiles, clothing, machinery, and food, notably meat, potatoes, and dairy products. Imports consist chiefly of petroleum and other fuels, raw materials and metals, produce, and an assortment of manufactured goods.

Northern Ireland has about 23,730 km (about 14,745 mi) of roads, including 113 km (70 mi) of motorway. The Northern Ireland Railways Company provided passenger service on 357 km (222 mi) of railroad track. Daily steamship and airline services connect Belfast with the rest of the United Kingdom.

Northern Ireland has three daily newspapers, the Belfast Telegraph, the Irish News, and the News Letter, all published in Belfast. In the early 1990s they had a combined daily circulation of about 272,000.

Northern Ireland, an integral part of Great Britain, elects members (now 17) to the British House of Commons. In recent years some of those elected have chosen not to go to London (usually in order to protest the domestic situation). The Government of Ireland Act, passed by the British Parliament in 1920 and modified by several subsequent agreements between Northern Ireland and Great Britain, is the country's basic constitutional document. In 1972, however, because of political and religious strife, London imposed direct rule. A 1973 act gave Northern Ireland much local autonomy, while Great Britain retained control over defense, foreign policy, currency, tariffs, and communications. In January 1974, direct rule was relinquished, but it was reimposed again that same year. The office of governor and the Northern Ireland Parliament were abolished, and the secretary of state for Northern Ireland became the head of government. The 78-member assembly that met from 1982 to 1986 had only reviewing and consulting responsibility. In 1985, an agreement granted the Republic of Ireland a limited role in governing Northern Ireland and set up an intergovernmental conference of British and Irish cabinet ministers.

The highest court is the Supreme Court of Judicature of Northern Ireland, which consists of the High Court, the Court of Appeal, and the Crown Court. Lower courts include county courts with criminal and civil jurisdiction and magistrates' courts for minor offenses.

Northern Ireland is divided into 26 districts for the purposes of local government. Each district is run by a council responsible for a variety of administrative functions.

The Ulster Unionist Party governed Northern Ireland from 1921 to 1972. More recently, the party has split into two groups; the Official Unionist and the Democratic Unionist; the latter are opposed to any compromise on Northern Ireland's future in relation to Great Britain and the most hostile to the Republic of Ireland. The other main political parties are the Social Democratic and Labour Party, which supports peaceful reunification with Ireland, the Alliance Party, and Sinn Fein, the political wing of the outlawed Irish Republican Army. Until 1994, Sinn Fein was excluded from talks between Britain and the Republic of Ireland on the future of Northern Ireland because it refused to denounce violence. However, its candidates participated in local and national elections.