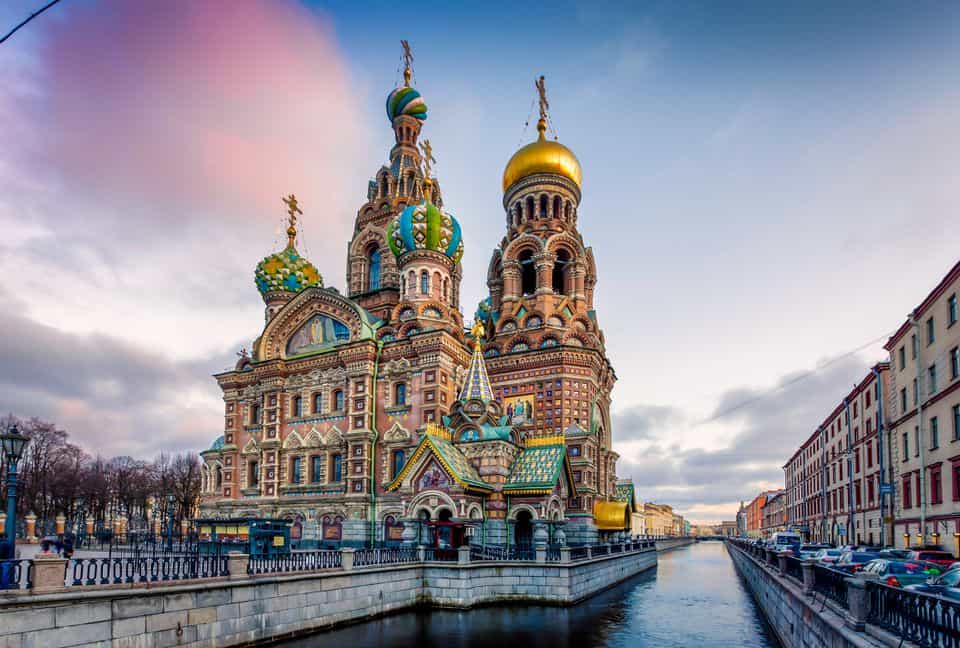 Saint Petersburg is the second largest city in Russia and one of the most beautiful cities in the world. It was founded in 1703 by Peter the Great as a window to Europe.

Thousands of workmen were brought there from all parts of Russia to build a new city on the swampy land at the mouth of the Neva River. Peter the Great was in a hurry. The work was fast and hard, and workmen dropped dead by the hundreds. But the work went on.

In 1712 Saint Petersburg, a city of great beauty, with palaces, cathedrals, churches, and government buildings became Russia's capital. Under later rulers the new capital of the Russian Empire grew rapidly in wealth and beauty. Architects were brought from Western Europe to lay out the city in harmonious squares. Buildings were constructed in gray and rose-colored granite. The Hermitage and the Winter Palace, the homes of the Russian czars, were equal to any in Europe.

When the First World War began in 1914, the German-sounding name Saint Petersburg was changed to Petrograd. After the October Revolution of 1917 the city was renamed Leningrad, after Vladimir Lenin.

During the Great Patriotic War of 1941-1945, the city suffered a great deal. The German armies laid siege to it on September 8, 1941, and for the next 900 days until January 27, 1944, or for nearly two and a half years, Leningrad was cut off from the rest of the country, including access to food. Daily shelling and air raids destroyed many parts of the city, killing thousands of people. Moreover, due to the Leningrad Blockade imposed by the Germans, starvation affected every person and family, as no food was allowed into the city. Bread was strictly rationed, and each person was allotted only 125 grams of bread per day. Rebuilding took years.

Diversity is one of the main features of Saint Petersburg. A lot of geographical names in the city are russified Finnish, and some are just translations from the Finnish language, for example: the Neva River, the Moika, the Karpovka, Okhta, Ulyanka, Ligovsky Prospect, Kalinkin Bridge, Zayachy Island and many others. Saint Petersburg now, as in the past, is the city of many nations and religions. Some of the streets still keep the names of original ethnic communities, for instance: Italianskaya Street, Grechesky Prospect, Shvedsky Pereulok, Angliysky Prospect and Anliyskaya Embankment, and others.

In the city there are a lot of churches and temples representing different religious groups: Russian Orthodox, Roman Catholic, Lutheran Churches, Muslim Mosques, Synagogues and a Buddhist Temple as well.

Saint Petersburg is a wonderful city: at every turn there is something to catch your eye. There are spacious squares and circles and the streets are wide and straight. Palace Square, Senate Square, St. Isaac`s Square, Trinity Square and Arts Square are all historical places, shaped with famous buildings and trimmed with magnificent monuments. Alexander Column, the highest structure of this kind in the world, stands on Palace Square. Peter the Great Monument, better known as the Bronze Horseman, is on Senate Square. Nicholas 1 Monument, which is considered a masterpiece of engineering art, stands on St. Isaac`s Square. Pushkin Monument is in the center of Arts Square. The Field of Mars, with an area of twelve hectares, is the biggest square in Saint Petersburg. The main street of the city is Nevsky Prospect. It runs from the Admiralty to the Alexander Nevsky Monastery and lines famous buildings, luxurious hotels and fashionable stores. Sadovaya Street got its name from a lot of gardens once facing the street. Moskovsky Prospect is the longest street in the city and Architect Rossy Street is the shortest one. It was in Saint Petersburg that the tradition to number streets appeared. One still can find 5th Line or 27th Line on Vasilyevsky Island. Line is one side of the street. The city is called Northern Venice because there are 65 rivers, tributaries and canals with artistically decorated bridges.

Eight bridges across the Neva River open every night in summer together with the unset sun and magnificent buildings, forming a picturesque view. At the four ends of the Anichkov Bridge over the Fontanka River along Nevsky Prospect are four sculptural groups comprising the world-famous composition The Taming of a Horse.

The longest bridge is Alexander Nevsky Bridge across the Neva River. Siny Bridge over the Moika River is the widest and completes the ensemble of St. Isaac`s Square. There are lots of museums and churches in the city. The Kunstkammer, the first Russian museum, the Peter and Paul Fortress, the Smolny Cathedral, the Russian Museum, St. Isaac's Cathedral and Savior-on-the-Spilt-Blood Cathedral, the Admiralty and the Winter Palace, and many others, attracting thousands of tourists from all over the world. Saint Petersburg's many museums house some of the world's most famous art collections. The Hermitage, for example, contains the richest collection of pictures and pieces of applied art in the world.

There are lots of theaters to suit all tastes. One can hear an opera or watch a ballet at the Mariinsky Theater or the Maly Opera House. Theatergoers can enjoy dramatic art at the Tovstonogov Bolshoi Drama Theater or at the Alexandrinsky Theater. Chamber and symphony music can be enjoyed at the Shostakovich Philharmonic Society. And, finally, those who prefer pop singers and rock stars can visit their shows at concert halls or sport palaces like the SKK or the Ledovy Palace. Two circuses are available for entertainment as well.

Saint Petersburg is also famous for its legendary White Nights. Different festivals take place at this time. It has also been a tradition for graduates of all kinds to celebrate their graduation and party 'till dawn in the night city. People all over the world know that in the far north of Russia, the city of Saint Petersburg, Russia's northern capital, dwells in magnificence and eternal beauty. Many who visit Saint Petersburg, fall in love with it, and return again and again!