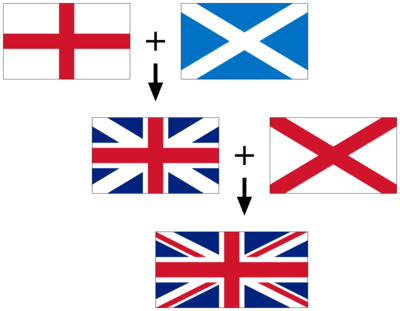 This is the popular name given it the flag of the Great Britain. Actually it is called the Union Flag and it is a mixture of several flags. It all began in 1606 when Scotland was joined to England and Wales. The Scottish flag (St. Andrew's Cross), which is blue with a white cross from corner to corner, was joined to the English Flag (St. George's Cross), with a red cross. The flag of St. George can still be seen on churches in England.

Later, in 1801, when Ireland was joined to the union, as it = is called, the Irish Flag of St. Patrick’s Cross was added, white with a red cross from corner to corner. In this way the British people got the Union Flag which is red, white and blue. King James The Third (1566-1622) ordered that the Union Flag should be flown on the main mast of all British ships, except on ships of war. Here the flag was flown at the front of the bowsprit.

The end of the bowsprit was called the Jack Star and so we get the name of Union Jack. A "jack", by the way, is an old word for a sailor. The Union Jack is also on the flags of Australia and New Zealand.