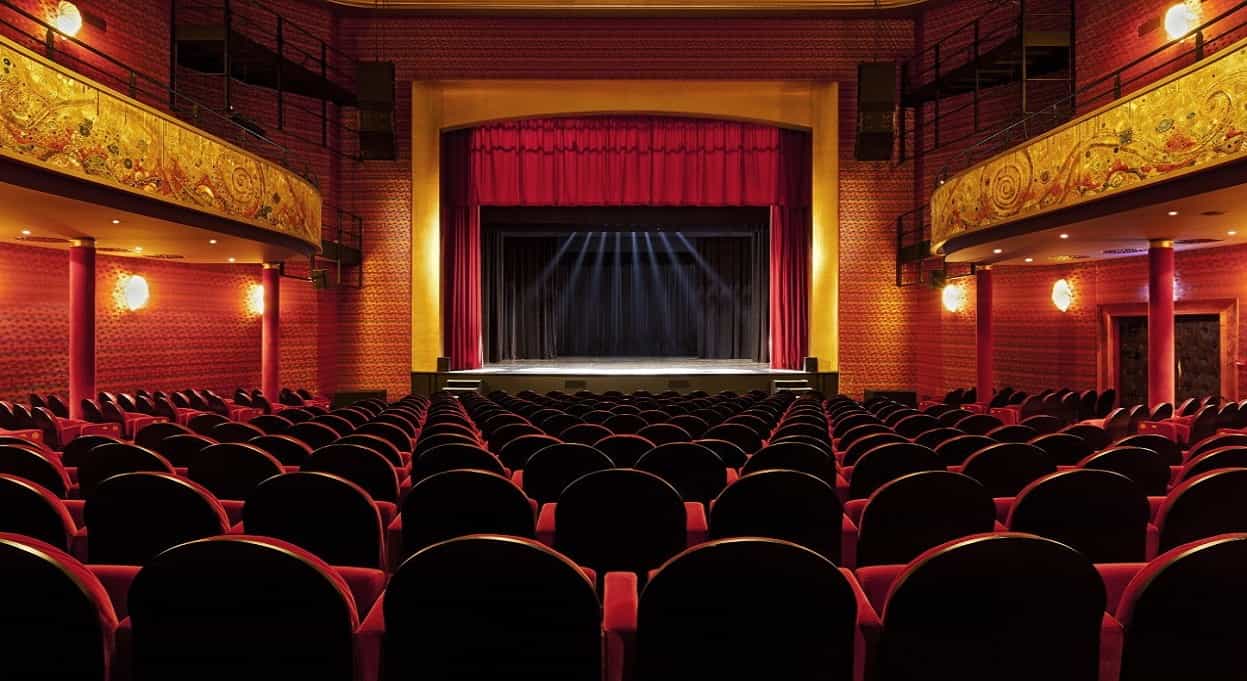 There are more than 13 theatres in our city. They show dramas, tragedies, and comedies. To tell you the truth I'm a great theatre lover. I try to see the most interesting performances in our greatest theatres like Alexandrinsky theatre. As a rule I go to the evening performances (usually they begin at 7 p.m.) It is rather difficult for me to book the tickets beforehand because the performances are very famous.

Sometimes we come to the theatre and see the sign "House full", but there are many people standing near and asking for the extra-tickets. I usually go there with my friends or parents. So we leave our coats in the cloak-room and bought a programme to know who is in the cast. We are shown our seats. As for usual we take places in the stalls, but also people like to watch the performance from the boxes, balconies and pits. After the 3 ring the light go down and the curtain drops.

Last time I was in the theater on the play, wrote by Maugham. It was named "Theatre". It was first night. But all performed so realistically, so true to life that I began to feel for them like in real life. All the play, the acting, the staging were beyond any description. The audience in times couldn't tear their eyes away from the stage. All the actors had wonderful dresses and the scenery was out of ordinary. The spectators were deeply impressed by the play and the cast. I have never seen the audience applauded so much before.

Many people couldn't help throwing flowers on the stage. It was a play I would remember for a long. In the beginning of the story she was young, unpracticed actress. She worried before the performance: her heart was beating, hands were crowing, but when she came into the stage, her voice became firm. ("But now, after having passed through the ordeal so many times, she had acquired certain nonchalance").

Years passed and we see Julia: she is 46. But she still has lovely figure, long legs, wasp waist, and rich low voice. She went through the trial of love, passion, devotion and work. It seems to me, that the author sympathizes to her, because she managed with each difficult situation. She became the "cold" actress. She knows that she was the best, what she had to do to stay the best. In my opinion she learned to live as she likes and at the same time she made everybody happy. Julia was a crack jack, so she didn't let the emotions take over her. She lived the life of her hero, but also the actress always remembered her teacher's words: "Don't be natural, only seem natural".

The leading female role was played by a young actress. And I would like to describe her. At first I would like to tell so words about her appearance. She had a lovely figure, everyone admitted that, she was fairly tall for a women, she had long legs. It was a pity that she had never had a chance to play Rosaline.

She always wanted to play Shakespeare, but even her Beatrice hadn't been loved by the critics. It was so because of her low, rich voice, perfect for long passages and emotional roles, but not for the blank verse. Julia was very proud of her beauty, even when she was 46. Some people can say Julia was a "cold" actress, but I can't agree with them. She could make the audience be completely carried away by her speech and articulation. In bygone years she was intolerably nervous by the first night, but having passed through the ordeals so many times she had acquired certain nonchalance.

After the play, if she was satisfied by her work, Julia pleased, exited and happy went to her dressing-room. In life Julia was a businesslike and not only in life, but in her job, family and even love. She loved her husband until she needed him; maybe she was artificial in her feeling. After all she was very talented actress and this role wasn't easy for playing.

Shakespeare told: "The world is the theatre and we are the actors." I think I can agree with his words. During all our life we play different roles - we are children at home, pupils at school and customers in the shop. Life gives us a great variety of scenery and situations. For all our life we depend on people, surrounded us, happenings, time, and place where we are now, just like an actor depends on the director, and script. But I need to add that our life can't be fully called the theatre because I think life is much more interesting, dangerous and unexpected.

Many people believe that it's much more convenient to watch a performance on TV at home, because you don't have to bother about the tickets, a baby-sitter and transport and so on. As for me I think that it is dull and boring to death. The main part of the theatre and theatrical performance are the atmosphere of a play, scenery and halls.

If you see it on TV you only see the movement, just like bad film and you only waste your time. The other thing is cinema. The films are specially made to attract public by scenery, beauty of animation and special effects. As for me-I go to the theatre to see the emotions, to the cinema to see well-made beautiful movement and switch on the TV-set to see news.