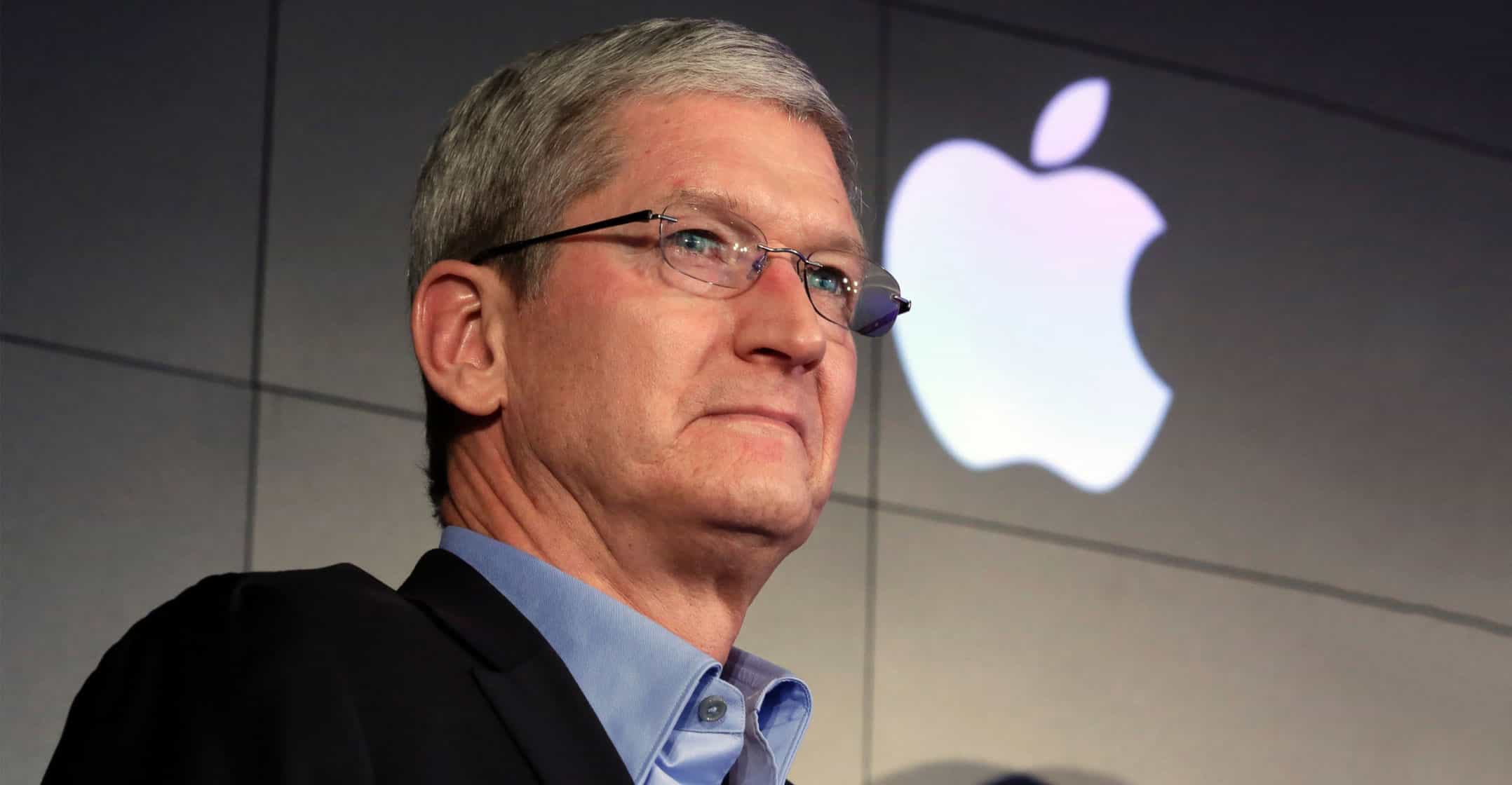 Born in Alabama in 1960, Tim Cook graduated from Auburn University with a bachelor's degree in industrial engineering and earned an MBA from Duke University's Fuqua School of Business. Following a 12-year career at IBM, Cook went on to executive roles at Intelligent Electronics and Compaq, before joining Apple in 1998. In August 2011, Cook was named Apple's new CEO, following the death of predecessor Steve Jobs.

Tim Cook was born Timothy D. Cook in the small town of Robertsdale, Alabama, on November 1, 1960. The middle of three sons born to father Donald, a shipyard worker, and mother Geraldine, a homemaker, Cook attended Robertsdale High School and graduated
second in his class in 1978. He enrolled at Auburn University in Alabama, graduating in 1982 with a bachelor's degree in
industrial engineering, and went on to earn a Master of Business Administration degree from Duke University's Fuqua School of Business in 1988. Additionally, Cook was awarded the title of Fuqua Scholar—an honor given only to students at the business school who graduate in the top 10 percent of their class.

Fresh out of graduate school, Cook embarked on a career in the field of computer technology. He was hired by IBM, where he moved up the ranks to become the corporation's North American fulfillment director, managing manufacturing and distribution functions for IBM's Personal Computer Company in both North and Latin America.
Following a 12-year career at IBM, Cook in 1994 became chief operating officer of the Reseller Division at Intelligent Electronics. After three years he joined the Compaq Computer Corporation as vice president of corporate materials, charged with procuring and managing product inventory. His time there was short-lived, however: After a six-month stint at Compaq, Cook left for a position at Apple.

"My most significant discovery so far in my life was the result of one single decision: My decision to join Apple". Cook stated some 12 years after joining the corporation, while speaking at Auburn University's commencement ceremony in 2010.
However, it wasn't an easy decision: Cook began working for Apple in early 1998, before the company had developed the likes of the iMac, iPod, iPhone or iPad, and when it was seeing declining profits instead of profit growth. According to Cook, prior to accepting his job at Apple, he was actually dissuaded from doing so on the grounds that the company's future looked very bleak.

"While Apple did make Macs, the company had been losing sales for years and was commonly considered to be on the verge of extinction," he told the Auburn graduates. "Only a few months before I'd accepted the job at Apple, Michael Dell, the founder and CEO of Dell Computer, was publicly asked what he would do to fix Apple, and he responded, 'I'd shut it down and give the money back to the shareholders."

But things quickly changed after Cook came on board as a vice president: Less than a year after his Apple debut, the corporation was reporting profits, an extraordinary shift from a recent report that showed a net loss of $1 billion from the prior fiscal year. As Cook rose to executive vice president and then chief operating officer, he took responsibility for managing worldwide sales and operations, along with leading the Macintosh division and continued development of reseller/supplier relationships.

In August 2011, Cook was named Apple's new CEO, taking over the position for former CEO and Apple co-founder Steve Jobs, who died in October 2011 after a years-long battle with cancer. In addition to serving as CEO, Cook sits on the corporation's board of directors.

In May 2014, Apple announced its biggest acquisition to date when it bought Beats Music and Beats Electronics for $3 billion. As part of the deal, Beats co-founders Dr. Dre and Jimmy Iovine would join Apple in executive roles. In a letter to Apple employees, Cook said,
"This afternoon we announced that Apple is acquiring Beats Music and Beats Electronics, two fast-growing businesses which complement our product line and will help extend the Apple ecosystem in the future. Bringing our companies together paves the way for amazing developments which our customers will love."

Following this, at the Worldwide Developers Conference in June 2014, Cook announced the latest version of the Apple operating system for desktop and mobile, OSX Yosemite. In September of the same year, Cook unveiled the iPhone 6 and iPhone 6 Plus, both of which had larger screen sizes and came with new features such Apple Pay and "Burst Selfies." He also announced the first new product under his reign, a wearable device to track fitness and health, the “Apple Watch,” available for purchase in 2015.

Cook continued to oversee the development of new products like Clips, an app that enabled the creation of short videos for social media. A few months after its spring 2017 debut, Apple unveiled the iPhone X, which generated buzz in the tech world for its facial recognition system.

Along the way, the company introduced the Apple News app to give users access to articles from a wide range of sources. In June 2018, Apple unveiled a 2018 midterm elections section, which promised to draw curated content from legitimate sites as well as exclusives like The Washington Post's Election Now dashboard through November. Addressing the issue of why he felt the need to funnel news to users in that manner, Cook said, "For Apple News, we felt top stories should be selected by humans, not to be political at all but ... to make sure you"re not picking content that strictly has the goal of enraging people."

Tax Rates and Other Controversies

During his time as Apple CEO, Cook faced mounting questions about the company's strategy of storing income overseas. In a 2013 hearing before the Senate, Cook rejected the notion that he was attempting to bypass U.S. tax laws, noting that Apple was paying one of the highest effective tax rates of any major corporation.

The leak of the "Paradise Papers&quot" in November 2017 offered new revelations of the tax practices of Apple: In 2014, after the European Union launched an investigation into Apple's arrangement with the Irish government, with the company paying a tax rate as low as 0.005% on its extensive holdings in the country, Apple transferred its assets to the Channel Islands off Normandy. The EU later ordered Apple to hand over approximately $14.5 billion in unpaid taxes.

After the Paradise Papers surfaced, the company released a statement that read: "Apple believes every company has a responsibility to pay its taxes, and as the largest taxpayer in the world, Apple pays every dollar it owes in every country around the world."

In late December 2017, Apple was hit with multiple lawsuits after admitting to intentionally slowing the performance of aging iPhones. Ostensibly done to adapt to diminishing batteries, the company faced charges that it was deceiving customers into paying more for new models.

Around that time, it was revealed that Cook had been informed he could use only private jets for business and personal transport, "in the interests of security and efficiency." The CEO's personal travel expenses for 2017 added up to $93,109, while his personal security
expenses totaled $224,216.

In November 2011, Cook was named one of Forbes magazine's "World's Most Powerful People." According to an April 2012 article in The New York Times, Cook was the highest- paid CEO among large publicly traded companies in 2012. While his salary at the time
amounted to around $900,000, Cook in 2011 reportedly made $378 million in total compensation from stock awards and bonuses. In 2015, he announced that after paying for his nephew's college education, he would donate the rest of his fortune to philanthropic
projects.

In August 2018, shortly after Apple became the first American public company to reach a value of $1 trillion, it was reported that Cook was set to collect approximately $120 million in stock. He had received a restricted stock award after taking over the CEO job in 2011,
meeting the threshold that required the company's stock to outperform those of two-thirds of S&P 500 companies over a period of three years.

In October 2014, Cook confirmed in an opinion piece he wrote for Bloomberg Businessweek that he is gay. "While I have never denied my sexuality, I haven’t publicly acknowledged it either, until now," he wrote. "So let me be clear: I’m proud to be gay, and I consider being gay among the greatest gifts God has given me."

Cook also wrote that he is inspired by these words of Dr. Martin Luther King Jr.: "Life's most persistent and urgent question is, ‘What are you doing for others?" He explained that his decision to put his personal privacy aside and make his sexual orientation public was an important step in advocating for human rights and equality for all.

"I don’t consider myself an activist, but I realize how much I've benefited from the sacrifice of others," he wrote in the op-ed piece. "So if hearing that the CEO of Apple is gay can help someone struggling to come to terms with who he or she is, or bring comfort to anyone who feels alone, or inspire people to insist on their equality, then it’s worth the trade-off with my own privacy."

Investing in the U.S.

In early 2018, Apple pledged to invest $350 billion in the U.S. economy and add 20,000 new jobs over the next five years. As part of the plan, the company committed to investing $55 billion in 2018 alone and build a new U.S. facility powered by renewable energy. Additionally, Apple said it would bolster its advanced manufacturing fund and expand its coding initiatives, designed to help students and teachers learn valuable computing skills.
In early February, The Wall Street Journal reported that Apple Music had been increasing its monthly subscriptions in the U.S. market at more than double the rate of Spotify, leaving Apple on track to pass its rival by summertime. However, Spotify was still well ahead
worldwide, with 70 million paying subscribers to Apple's 36 million as of January 2018.